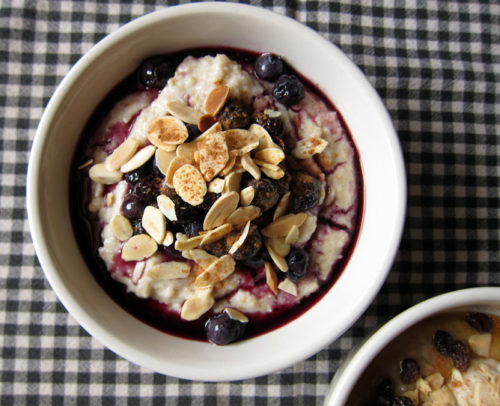 I’m breathing a huge sigh of relief. We’ve moved into our own home (well, it’s still an apartment, but it’s our very own place) and we’re totally thrilled. The act of moving was slow and steady – we decided to move over the course of a week which seemed like the way to go at the beginning, especially since we were only moving 10 blocks away. However, it stretched out the actual pain of moving (hello stress! hello aches & pains!) rather than attacking it in one fell swoop. But we did it!! We’re here and we love it. Sure there are boxes everywhere and still so much to organize and get done, but we’re slowly chipping away at our list and getting things set up. The real drag came when our internet and phone were set up 4 days later than promised. No internet? Now that’s a real bummer. But we’re all set up and our lives are getting back to normal. Finally. 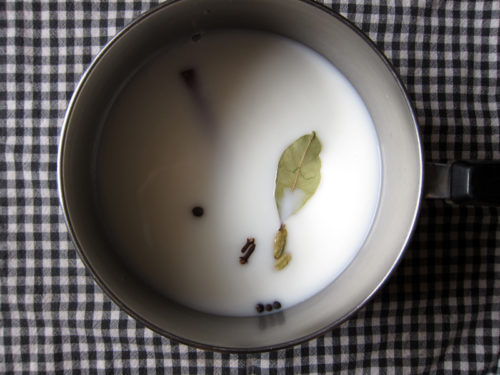 But before we get carried away, there’s nothing wrong with some good old fashioned wisdom. Like a hearty, healthy breakfast to start the day. Yup, I’m talking about oatmeal. It’s been years since I’ve mentioned the stuff (like this baked oatmeal with apples or this pumpkin version) but I eat a bowlful of it weekly (& sometimes more). It’s not sexy food, but I think this version wins a few points for “interesting-ness”. Plus, it’s tasty and creamy and I actually crave it first thing in the morning, so what more could you want in a bowl of oats? 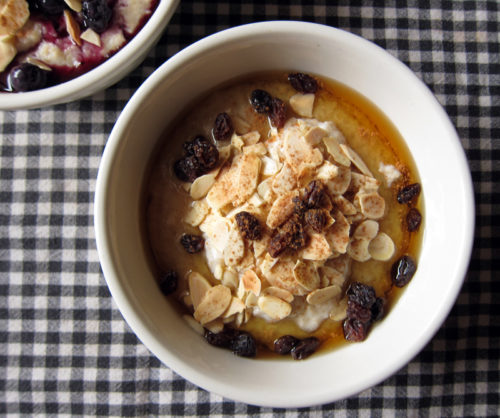 The difference here is all in the preparation. Spices get added into water & cold milk (dairy or non-dairy, no big diff) and then when it simmers away for a bit, that’s when the good stuff begins. Do not doubt the power of a good spice infusion! Oats get added into the fragrant pot (remove the spices first or you’ll have twigs and shoots in your bowl). I like to add both Scottish oats (the fine, almost powdery stuff – Bob’s Red Mill makes a fine version) along with large flake oats, but you can stick with one or the other. I think steel cut would also work well here too, but you’ll have to adjust the amount of liquid and the cooking time (check the package for guidance). If you’re gluten-intolerant, make sure your oats are from a non-contaminated source, ie. buy gluten-free oats. 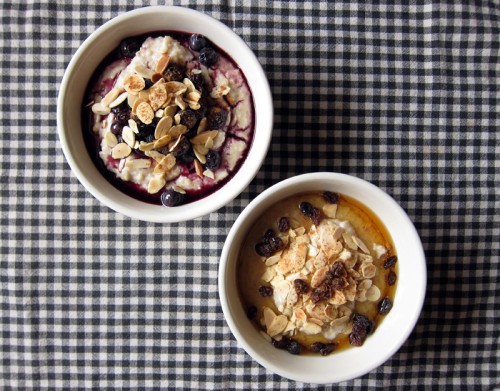 Of course, the best part about oatmeal is the toppings. I love a good amount of cinnamon, toasted nuts, maple syrup and raisins. My husband goes for fruit, coconut and brown sugar. Make it your own and then get on with your day.

I loved the spices below, but you could play with your own blend – vanilla would be lovely here (extract or even better, the scraped pod). Don’t be scared of the bay leaf, it adds a subtle, sweet herbal quality.

In a medium sized pot, add in the water, milk and the whole spices, along with the pinch of salt. Let it simmer over medium heat for 5-10 minutes until it comes to a slow boil. Remove spices, reduce heat to low and slowly whisk in the oatmeal, stirring occasionally until oats are tender, about 15 minutes. Serve in bowls and add in your favorite toppings. Makes 2-4 servings.