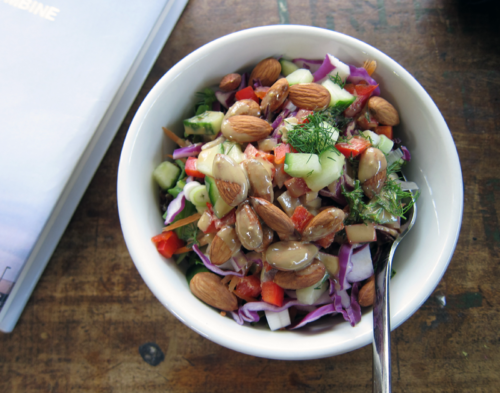 I’ve always been a voracious reader, though, I’ve got a few friends who have me beat. They read so many books a month that it puts my book pile to shame. But it’s good because they always have so many interesting books to recommend. The book I’m reading right now, which was recommended to me by my not-so-much-of-a-reader husband, is about the Columbine high school massacre. Uh, not exactly a light read and it’s quite disturbing, but man is it ever gripping. The cover of the book is stark and gorgeous (good stories are most important but good cover design is a thing of beauty) but the insides are quite dark. Anyway, I think I could use a lighter read next go around. If you’ve got any suggestions, leave me a comment!

And now onto food! Filling, happy and wonderful food. Like this glorious bowl which comes from Whitewater Cooks

, a cookbook from the Whitewater Resort in the BC Kootenays. It’s a good book and I recently got their latest cookbook but it’s STILL packed away in a box from our move. However, this is an old standby. The original recipe is called a “glory bowl” but I get the giggles just saying it, so I’m re-naming it a glorious bowl. And it sure is. It’s packed full of colour, crunch and texture and the dressing is tangy and pops with flavour.

The orignal recipe called for spinach and grated beets and carrots, but I went crazy with my bowl ingredients. Fresh dill and cucumbers! Red peppers and purple cabbage! Red quinoa instead of brown rice! It just goes to show you how simple it is to make this bowl completely yours. 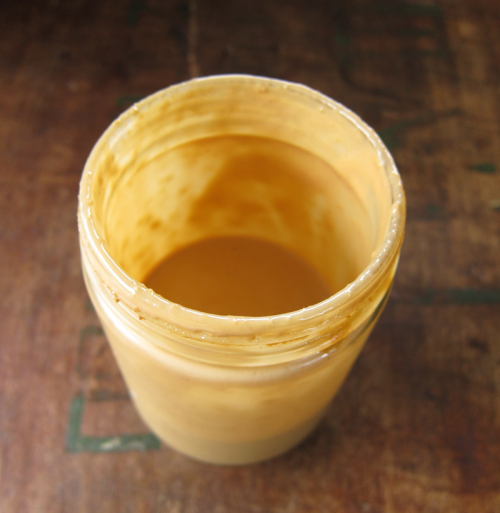 But let’s talk about the dressing a bit more. While the rest of the bowl looks lively and bright, the dressing is brown and creamy. It doesn’t look like much. In fact, I keep it in an old peanut butter jar and I accidentally reached for it the other day instead of grabbing my jar of Adam’s peanut butter. Luckily, I realized the difference before it made its way onto my morning toast. But it’s sooo good and it makes a lot.

So make this part of a summer gathering with tons of different topping ingredients where everyone can customize their own bowl. And if you still have dressing leftover, it’s great to use on green salads or as a vegetable dip. 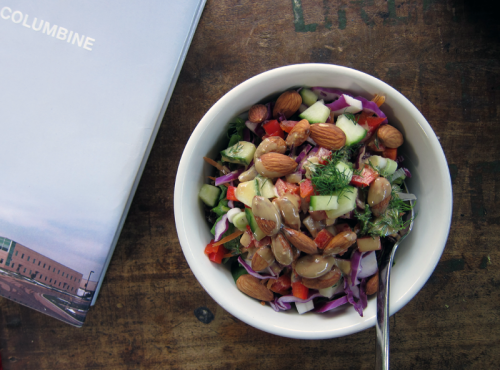 Using a blender or an immersion blender, combine everything but the oil. Add the oil in a slow stream  until combined. Store in a lidded jar and refrigerate. Should last a week or two in the fridge.

Layer a bowl with ingredients, grains first and then pour over with dressing. The dressing makes a lot, so use it over salads or as a dip throughout the week.