in the eye of the beholder: butterscotch confetti squares 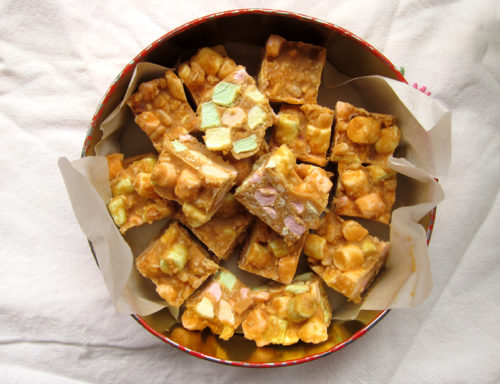 Warning: you are either going to love these or hate these. I mean, just look at that tin of fluffy pastel confectionary! It’s definitely a bit frightening but beautiful, in that retro kitchy way. I wish I could tell you that this recipe has long been in our family recipe box, but that would be a lie. I first came across these on Twitter via The Casual Baker and I was intrigued and a quick google search revealed a bunch of forums and online chatter of Canadian moms reminiscing about these squares from their prairie childhood. So when my in-laws were hosting a large family barbeque where most of the family comes from solid Manitoban stock, I knew these marshmallow treats would feel right at home. 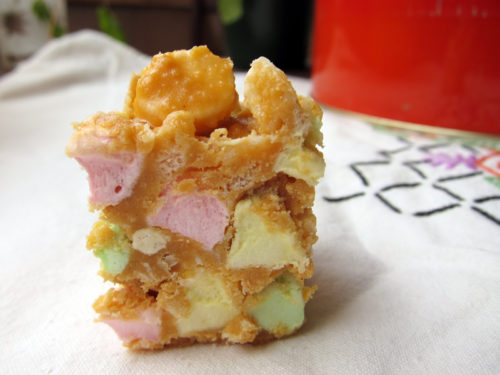 The night before the barbeque as I got all the ingredients on the counter – mini fruity pastel marshmallows, processed peanut butter, butterscotch – I could feel the decades rolling back. The recipe was a cinch to prepare and I felt that Canadian prairie grandmas were along for the ride cheering me on! I even added a couple handfuls of rice krispies to the recipe sensing that the added crunch would be a nice surprise (it was). Sure, I felt a pinch of guilt when the documentary, King Corn, about the evils of corn syrup, was on tv while the squares were cooling, but all that changed when I took my first bite. These were good…really, really good. And I wasn’t simply charmed by their retro good looks or their Canadian prairie pedigree either. When I gave a slice to my husband, he remembered these squares from his childhood as he reached for seconds.

These are so much more than a retro throwback or a low brow guilty pleasure. Or maybe not. Make up a batch and give them a try. Just be sure to slice ’em small because they are teeth-clatteringly sweet and share them with friends and family. 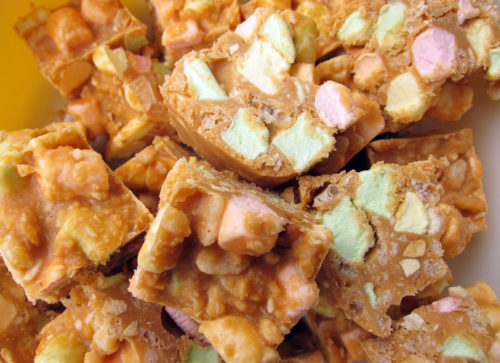 elsewhere: In the grips of summer? Give Mexican corn a try – lime, chili & salt. And whip up a Panzanella salad with beans – a salad that works as a meal.

Line an 8×8 pan with parchment paper & set aside.

In a medium sized saucepan, heat the butterscotch chips, butter, peanut butter, and salt over medium heat until melted. Remove from heat. Stir in the vanilla, coconut and rice krispies. Carefully stir in the mini marshmallows and pour into prepared pan. Refrigerate until firm and then cut into tiny squares. Store in fridge.

« taco salad, for the summer of my imagination
pink margarita on the rocks »

26 comments to “in the eye of the beholder: butterscotch confetti squares”