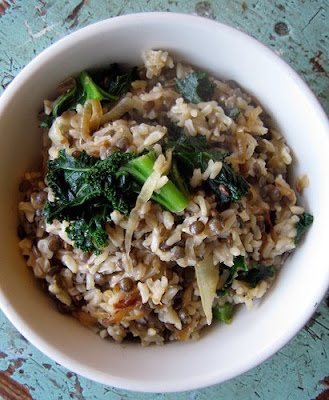 Yeah, this is a weird recipe. It’s got a ton of steps, it uses up every freakin’ burner on your stove and then it has the gall to use up another, plus it’s not even that pretty too look at. After all this work, you don’t want to serve this to guests unless they love you like the dickens. This recipe is adapted from Gourmet and it sucked me in with Francis Lam’s snappy writing. The good thing is that while this meal may ask for your first born child, it is tasty comfort food and I’ll make it again. 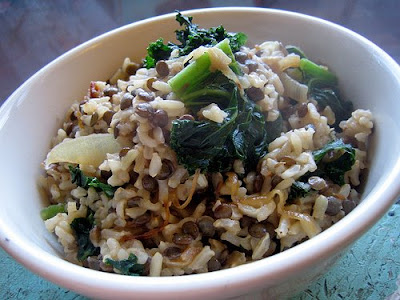 I made this meal a couple of weeks ago when it was cold and dreary outside and it looked like spring would never arrive. But now it’s short-sleeve wearing & bare legs in skirts kinda weather so I probably won’t make this again until next winter, but it’s here waiting like a good friend. 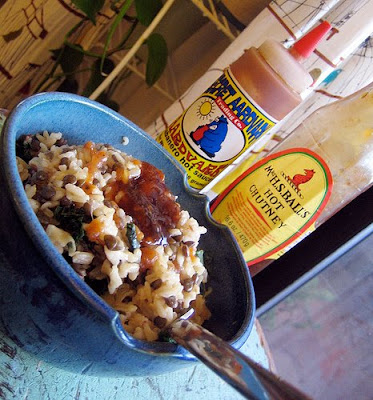 The flavours are solid and hearty and I added the kale for brightness and extra nutrition points, but the tastes in your mouth won’t take you on a wild roller coaster ride. Instead, they are subtle and I bumped everything up a notch with a squeeze of my favorite hot sauce and a dollop of chutney. I felt it needed a bump or two. So are you going to make this after all my warnings? I think you should. So there. Oh, and a few other things of note. This site is listed along with a whole bunch of other wonderful food blogs on Gourmet’s list of favorite food sites. Oh my!!! As well, I have a new post up on the Food Network Canada site about my new favorite breakfast place, Deacon’s Corner. Please note that all the crazy over-zealous bolding was not done by me.

1. Caramelize the onion in a large cast iron pot. Cook ’em slowly in the olive oil (about 2-3 tablespoons), sprinkle them with salt and pepper, and let them get brown and glisten-y. Set aside.

2. Meanwhile, cook the lentils in enough water to cover them. Bring to a boil, turning down heat to med-high until tender. Drain and set aside.

3. Get another pot out and put in some more olive oil…about 2 tablespoons worth and heat over med-high heat. Add in cinnamon stick and cardamom pods and let it get fragrant. Throw in rice, cumin, and chili flakes and saute for a few minutes until about half the rice turns opaque. Add in water and cover. The rice should boil almost immediately so turn down heat to med-low and simmer until rice is done.

4. Get out another small pot (aren’t you glad you have a 4 burner stove??) and cook up the pasta. It won’t take long since it’s so tiny. Drain and set aside.

5. In a large pan or pot, add in some more olive oil…just 1 tablespoon and add garlic. Saute until it smells good and add in the kale and some salt. Cook down until tender.

6. Dump everything into the caramelized onion pot and give it a good stir. Heat everything up if need be, but otherwise grab a few bowls and dig in. Serve with chutney and hot sauce for added goodness.