Want a super easy candy recipe that’s actually pretty healthy too? Look no further than these lightly sweetened no-bake coconut snowballs. Don’t be confused with one of my older coconut snowball recipes – totally different but super tasty. When I first saw this recipe, it reminded me of these coconut snowball truffles available at a local chocolate shop chain. When I was an office worker and was having a rough day, I’d pop into the chocolate shop nearest to my work and buy one truffle from the glass display. The combination of white chocolate, coconut and who knows what else would instantly melt away my office sufferings. I was hoping that these confections would come close to that dreamy combo and I was surprised when these actually measured up. Sure, there’s no gooey chocolate involved, but the flavours are bang on. Not bad for a holiday treat without the chocolate, butter, refined sugar or gluten! Did I mention that they’re vegan too? I know. 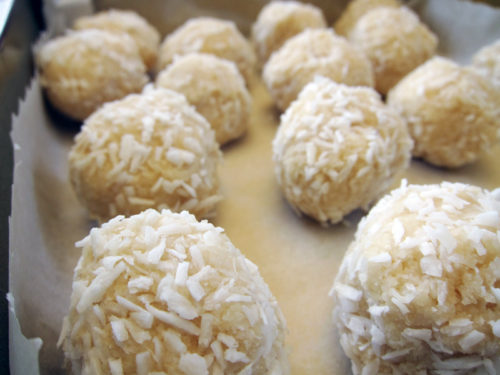 I strayed a bit from the original recipe since I just jotted down the ingredients and didn’t read the instructions. I know, a big no-no. But it all turned out for the best. Where the original recipe calls for 1 cup of coconut to get blended, I added the whole amount (1 and 3/4 cups). This made the mixture less sweet which is okay by me and instead of only giving me 12 snowballs, I got 15 out of the deal. Kind of a win-win situation, I think. I skipped the cinnamon because I just wanted to taste the coconut, but feel free to add it in.

I knew my dad & brother would love these treats, so I included them in a holiday package and mailed them off to Ontario. Since I leave shredded coconut and coconut oil in the cupboard I think this confection should be pretty shelf stable, making them an excellent treat for sending off to friends and family. I’ll report back once I hear! Also included in the package, were some coconut almond bites, which made me think that these snowballs would be another round object that would taste most excellent dipped in a good chocolate. Totally something to try for next time.

elsewhere: Want a more decadent holiday treat? Make a batch of salty Millionaire’s Shortbread Bars. You can find this amazing recipe over at Poppytalk, of course!

snow white coconut snowballs
(recipe adapted from the kitchn)
I think these would be uber-amazing dipped into melted bittersweet or even a good white chocolate after they’ve been rolled in the coconut flakes…just saying!

Place 1 3/4 cup of the shredded coconut, along with the coconut oil into a food processor. Blend on high until it turns into a creamy paste. Add in the maple syrup, coconut milk, vanilla, salt and cinnamon (if using) and pulse until blended. Shape the mixture into 1 inch balls, rolling them in the remaining coconut. Store in a tightly sealed container and refrigerate for up to 5 days. Eat cold or at room temperature.