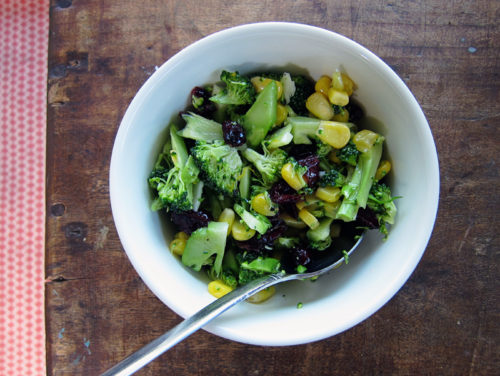 When I was little, my idea of a refreshing quencher was drinking the cold pickle juice liquid out of the jar. I make no apologies. So I’m always drawn to recipes with “zesty”, “tangy” or “sweet & sour” in the title. This salad did not disappoint. In fact, it may just be my new broccoli slaw favorite. You see, I have a very popular broccoli slaw recipe on this site – if you’re not familiar, let me introduce you to the broccoli crunch slaw. It’s turned raw broccoli haters (me included) into broccoli crunch slaw lovers. Friends are always commenting that the broccoli crunch slaw is one of their most favorite recipes on this site and for good reason: it’s plain awesome. 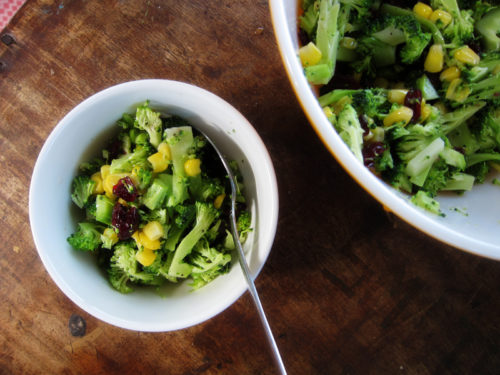 But this slaw has me upping the ante. It has its similarities – there’s the raw green monster (broccoli, duh), red onions and dried cranberries. But there’s corn which has a nice sweetness of its own to lend to the balance. I used frozen here, but when corn on the cob season arrives, I’ll be slicing the raw kernels directly into this slaw for a better crunch. But the real distinction is that instead of a mayo/greek yogurt dressing, this one has a big ol’ punch of lemon (zest & juice!) along with the pow of red wine vinegar. A bit of olive oil to add some needed slickness and agave syrup comes along to sweeten the deal. This is a true sweet and sour slaw that delivers what it promises. I’m in love. 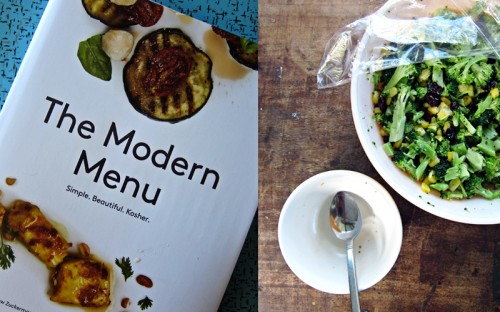 The recipe is adapted from a kosher cookbook that I received recently, The Modern Menu

. The truth of the matter is that I didn’t have high expectations for the book. The photos didn’t draw me in and the that “new book smell” was a little overpowering. But, this salad caught my eye. The original version calls for the broccoli to be prepped not as a slaw, but as florets. But I wasn’t standing for that nonsense. When it comes to raw broccoli, I chop those trees up fine. I don’t know if there’s anything to it, but shards of broccoli just play nicer with my tastebuds that way. I subbed in agave syrup (though honey would be fab too) for the white sugar because I was out of white sugar. I also ditched the white vinegar for red wine vinegar because everyone knows winer is finer. The original also called for just lemon zest, but I decided to go ALL IN and add the juice as well. It was a good move because the slaw really serves up a good lemony pop. I should warn you that the longer this salad sits, the less lemony it tastes. Like the next day? Not so lemony, but still nice and tart. Just keeping it real. 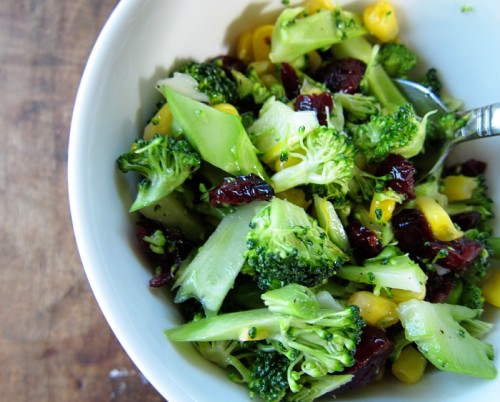 I don’t know what more to say, but just make this already. I’d love to know what you think.

If you like a tart-tingling sweet & sour slaw, then don’t change a thing. But if you don’t want too much of a vinegar-punch, then just add 1-2 tablespoons of the red wine vinegar instead of going whole hog. Let your tastebuds be your guide and taste before dressing the slaw.

Using a large knife, thinly slice through the broccoli heads and then again to produce slaw-like shards. Dump broccoli slaw into a large bowl, along with the corn (I used frozen corn – no need to thaw), cranberries, onion, and the lemon juice and zest.

In a small jar, combine the agave syrup, red wine vinegar and olive oil, along with the salt & pepper. Taste and adjust seasonings – keeping in mind that the slaw is already a little bit lemony! Pour dressing over the slaw and toss well. Refrigerate for 20 minutes before serving. Toss again & serve.

I received the cookbook from the publisher, but all the opinions are my own.