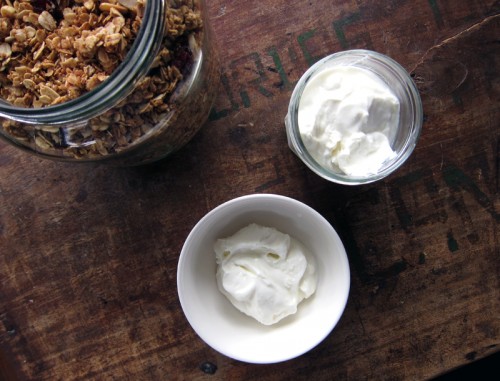 Growing up my mom made yogurt from scratch. She had a countertop yogurt maker that made the stuff in little cups. I wasn’t one of these newfangled babies who loved yogurt. I hated it with a passion and if you can believe it, I only started eating it when I turned 30. I also hated whipped cream and didn’t have my first lick until I was 25. I’m weird like that. 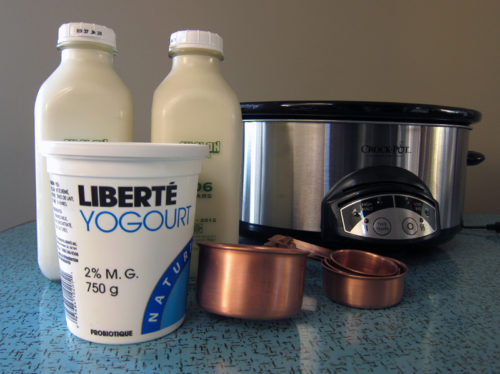 Now I like yogurt and I eat it for breakfast when I’ve got granola to go alongside. A couple of months ago, I was offered a free Crock-Pot. I usually don’t accept a lot of free offers, but I had been curious about slow cookers after a friend had told me that she really liked hers. So I jumped and said yes, please. The first thing I made – a beef stew – wasn’t very exciting, though I blame my lack of recipe more than anything else. I put the slow cooker aside and decided that the next time I pulled it out, I’d make something a bit more interesting. Homemade yogurt, that’s pretty interesting, right? 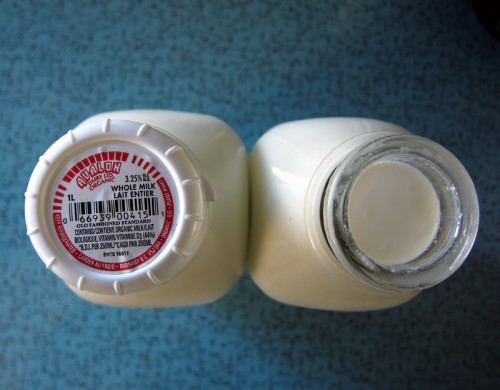 Originally I heard that using whole milk was the way to go. Whole milk shouldn’t be confused with the 3.25% homogenized milk sold in Canada (I got confused too). Whole milk still has bits of butterfat in the milk – you can see it in the picture above. It supposedly makes a creamier and thicker yogurt than using skim or homogenized, so that’s what I went with. The recipe itself is simple – heat up the milk, let it cool, add in the yogurt, let it sit over night wrapped up in beach towel. Yes, a beach towel. It insulates the crock pot keeping in the heat. 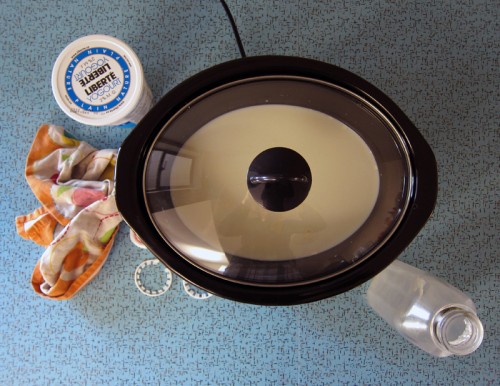 There’s a lot of waiting around, so it’s best if you start this in the early evening (about 6 hours before you go to sleep) and 12 hours later you’ll have fresh, delicious tasting yogurt. Below is what it looks like when it’s done. It’s pretty runny!

I’m not sure this is a penny-pinching recipe because organic whole milk where I come from costs about $3.19 for a 1 litre glass bottle and you’ll need two bottles (with some leftover milk for your coffee). The resulting yogurt was 2 and a half medium sized jars worth of yogurt, less if you strain the yogurt afterwards to make Greek-style yogurt. A tiny bit of savings, but nothing to really write about. Still, it’s homemade and you know exactly what went into it and there’s no waste – especially since you can use your homemade yogurt as a base on your next batch. I’m happy with the results and I’d make it again. 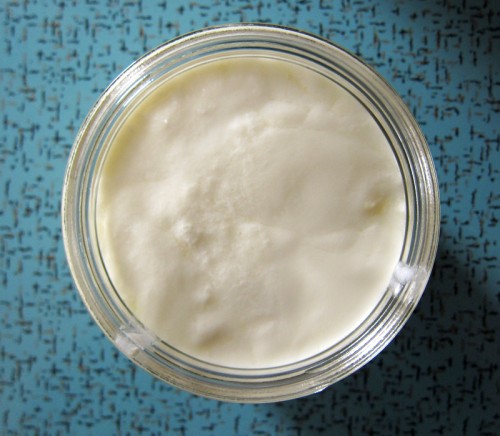 Also, now that I’ve got this thing, I’d love to hear your favorite slow cooker recipes! Like can I put dried beans in there and will they cook up nice and plump? The book I took out from the library said no (they still require cooking separately), but I’ve since heard that yes, yes, you can. Help!

Turn your crock pot to low heat, pour in the milk and let cook for 2 hours & 45 minutes. Turn off the heat and let it sit for 3 hours.

Skim off the dreaded milk skin and whisk in the yogurt. Wrap the entire crock pot in a large beach towel to keep in the heat and let sit overnight for 12 hours. Spoon yogurt into jars and refrigerate. Or, if you like a thick, greek yogurt style, use a coffee filter and a coffee pot to strain off the extra liquid as I mention in an old post. If you want to sweeten or flavour the yogurt, you can do so at this stage (here’s a version for orange yogurt).

25 comments to “make homemade yogurt in a slow cooker”