how to eat your vegetables: late summer stewed vegetables 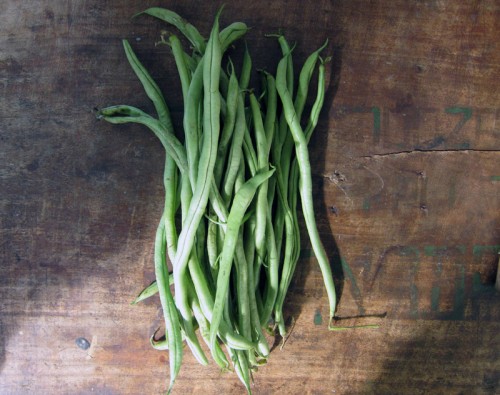 Can I tell you something? It’s stupid and I know it, but sometimes I’m afraid of my vegetable drawer. Well, what’s in it to be exact. Being a member of a farm share is beyond wonderful, but it can be overwhelming – especially when I receive vegetables that I wouldn’t normally by. Zucchini by the half-ton and eggplant, I’m looking at you. But because I hate wasting food more than I’m afraid of it, I make do. And I try to be grown up about these things. 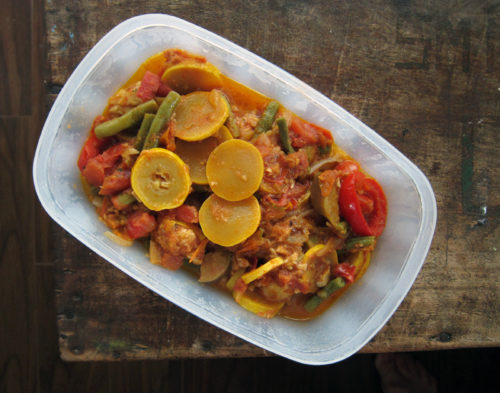 This fragrant pot is the answer to all of my late summer vegetable woes. Not only did this recipe use up a ton of my vegetables putting me more at ease with my vegetable drawer, it tastes really freaking good. We ate a big bowl of it for dinner with crusty sourdough spread with cold butter. It was perfect, rustic fare. A glass of red wine alongside is nice too. Just saying.

The idea behind this dish was to recreate a dish we had at Toro Bravo when we were in Portland last month. While everything we tried was lovely, I really wanted to try to recreate their green beans cooked long and slow in tomato sauce. I found a similar from Martha Stewart and decided to expand on the vegetable portion. Fresh garden tomatoes? Yes. Green beans? Of course! But in went some zucchini & yellow summer squash, onion, eggplant and sweet red pepper. The magic spice here is cinnamon and it adds the perfect mediterranean flavour. Everything gets sauteed on the stovetop before getting banged into the oven for a bit. I’m sure the green bean version I tried at the restaurant was baked for a couple additional hours to make sure everything was super-soft, but my version was good too. Not quite oozy-soft, nor tender-crisp, but a nice meeting point in between. 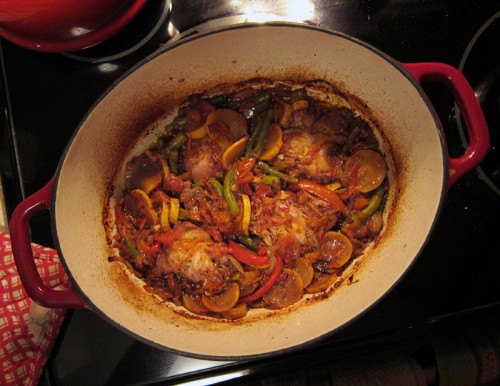 For a different take on this dish, I introduced chicken to the mix a few days later. I browned seasoned skinless, bone-in chicken thighs in a bit of olive oil on the stove top and then dumped the leftover stewed vegetables along with a cup of dry red wine into the pot to bake in the oven for 40 minutes or so. The result was better than I could have imagined. The second time in the oven along with the wine allowed the vegetables to get super soft, so much so that they almost melted away into the sauce. Tender and buttery and oh-so-lovely with the chicken.

So grab spoon out a bowl of your fragrant stewed vegetables (while saving some for leftovers), slice yourself some crusty country bread and pour yourself a glass of wine. You deserve to enjoy this moment and laugh about being afraid of your vegetables. Being an adult can have its privileges.

elsewhere: I made quickles, aka quick zucchini pickles for poppytalk. They’re tasty so get the recipe. Also, the week before I made a simple egg & tomato sandwich and it was sublime. 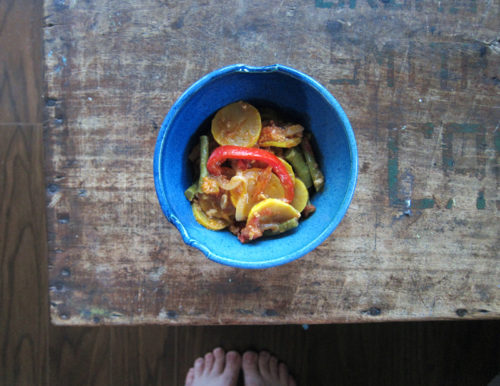 In a large oven proof casserole pan or skillet with lid, heat olive oil over medium heat and add in onion and garlic. Saute until soft. Stir in the tomatoes and break them apart while stirring them around. Add in the remaining vegetables and a good pinch of salt, crushed red pepper, herbs de provence and cinnamon. Let everything simmer for a bit to soften and get familiar with each other. Sprinkle with parmesan cheese and toss in some cubes of cheese, if that’s  your thing. Pour in a short glug of olive oil if you wish. Put on the lid and put into a hot oven for 35 minutes or so. When your kitchen starts to smell amazing, it’s ready. Serve in deep bowls and save some for leftovers with the chicken thighs, remember?

22 comments to “how to eat your vegetables: late summer stewed vegetables”