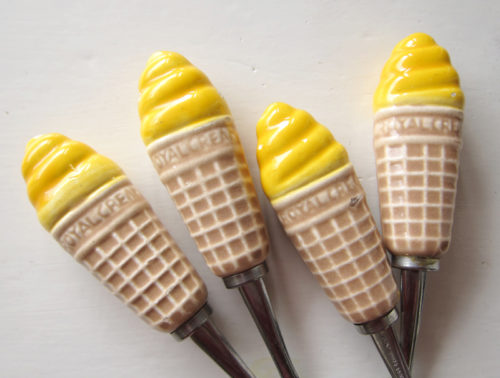 It’s been one of those weeks and it’s nice to have a cloudy Sunday morning to reflect back on things. There was a bit of big news: we bought a car. Now, for most people, it’s kind of a no-brainer to have a car. But I’ve never owned or really even wanted a car. We live pretty much in the centre of things and I love exploring on foot, by bike or even by bus. But now we own a 2005 silver little hatchback and it’s like our world has opened up exponentially. We can, at the drop of a hat, head out into the mountains for a hike or cross the border to visit friends. Freedom and cars always seemed like such an advertising ploy or a teenage fantasy, but it’s true! I didn’t think I’d be so much in love with the idea of car ownership, but I’m smitten. While I do have my license, I actually haven’t driven in 20 years, so I’ll need a bit of practice to brush up and get over my fears. After biking through traffic and scowling at cars who don’t pay attention to cyclists, I’ve got quite a bit of fear to get over. Baby steps and parking lot practice, here I come! 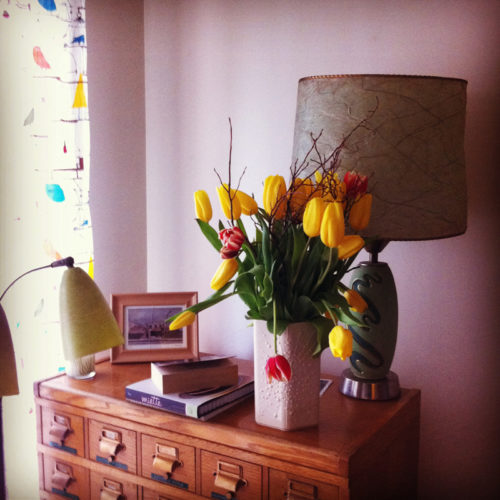 Then came Valentine’s Day and if you didn’t know it already, I’m a sucker for love. I don’t care that it’s a greeting card holiday one bit. I love pinks and reds and flowers (though tulips over roses, please). And I love fussing over my husband. I always make a card from scratch and this year I even made a little 8 song mix over at 8tracks that you are more than welcome to listen to. But it was our dinner that night that was so fantastic and perfect. There was a perfectly seasoned steak that I cooked in the oven at very low heat (200F) for 10 minutes per side before searing on the stove. Perfect medium-rare insides and a lovely crust outside. Yum. Oven roasted herbed potatoes that were crisp on the outside and soft and perfect inside. A raw mixed vegetable asian slaw and steamed brussels sprouts completed our plate. But it was dessert that gilded the lily.

My favorite brownie recipe plus a small scoop of buttermint ice cream put the biggest smile on Cornelius’ face. The thing is, I had spied the ice cream recipe quite a while ago on the kitchn, but I was put off by the addition of butter extract. Butter extract, really?? It sounded gross and I’m generally against single-use tools and ingredients. So I had pretty much made up my mind that I’d be giving this recipe a pass. But when I found myself in the baking section of my favorite kitchen shop the day before Valentine’s Day, I grabbed the little bottle of butter extract and that was it, buttermint ice cream, here I come. 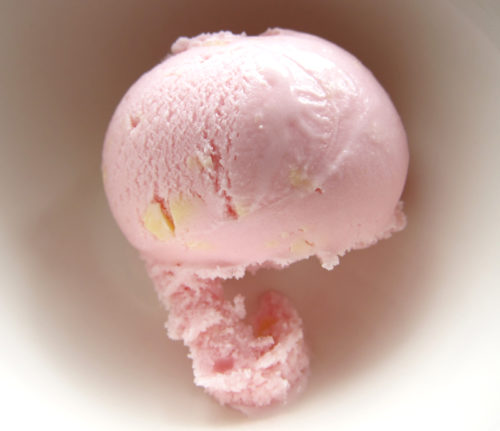 The original recipe calls for turmeric to stain the ice cream yellow which sounded all fine and good. Except that I was making this for Valentine’s Day and I was jonesing for pink. Plus, it makes sense as it recalls the pastel buttermint candies that I loved as a kid with their pale pinks, greens and yellows. The recipe itself is super simple and I like that it doesn’t contain eggs. It does require a bit of cream cheese which adds to the creamy texture. It’s a good trick – the ice cream didn’t get rock hard after spending a couple days in the freezer which is a good thing. Another discovery was drizzling melted white chocolate (I used Callebault…the good stuff here) while the ice cream churned, adding thin shards of crispy chocolate ribbons throughout. Incredible! And because I was already preheating the oven at a low temperature (200F), I decided to melt the chocolate in a small cast iron pan in the oven. The chocolate melted perfectly and quickly….no fussing with a double boiler! Genius!

Yup, I’ll be making this again. Tinted pale green for St. Patrick’s Day? Why not! 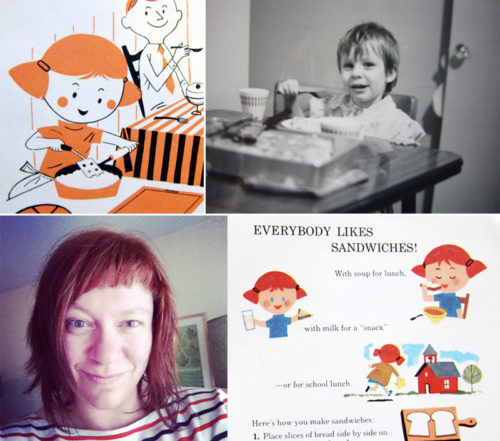 One more thing, today is this blog’s 7th birthday. Seven years of Everybody Likes Sandwiches! Not bad run, I think. I’ve learned a lot of new things here in this public space – about cooking and myself. Here’s to seven more years! Anyway, thank you so much for reading and commenting and sending me emails. I don’t think my life would be quite so awesome without this space for me to vent and share. I’m grateful.

elsewhere: Earlier this week at Poppytalk, I baked up a big dish of comfort. Creamy mac and cheese with cauliflower and chard. Delicious and simple. Go check out the recipe! 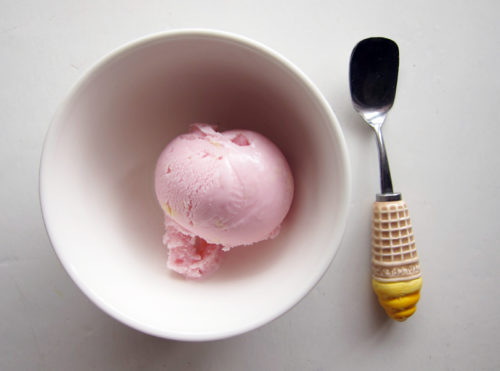 1. In a small bowl, use a fork to mix together 2 tablespoons of the milk with the cornstarch. Set this aside. Whisk together the cream cheese, salt and food colouring together and set aside. In a large bowl or stock pot, fill with ice and cold water – set aside.

2. Combine the rest of the milk, along with the heavy cream, sugar and corn syrup into a medium sized sauce pot and bring to a boil. Let boil for 4 minutes then remove from heat. Whisk in the cornstarch mixture and then bring back to a boil over medium-high heat. Cook for one minute and then remove from heat. Whisk in the cream cheese mixture and beat until well incorporated. Pour the mixture into a large ziplock bag, seal tightly and then dunk mixture into the bowl with the water and ice. Put in the fridge and chill until cold, about 30 minutes.

3. Melt white chocolate. I had the oven at 200F so I just melted it in the oven & it worked like a charm. Otherwise, use a microwave or use a bain-marie.

4. Pour ice cream mixture into your ice cream maker and start churning. Add in drops of butter extract and peppermint. Taste and adjust, if needed. Slowly drizzle in the melted chocolate. Churn until the mixture gets thick and creamy. Pour ice cream into a lidded glass container and freeze for 4 hours.