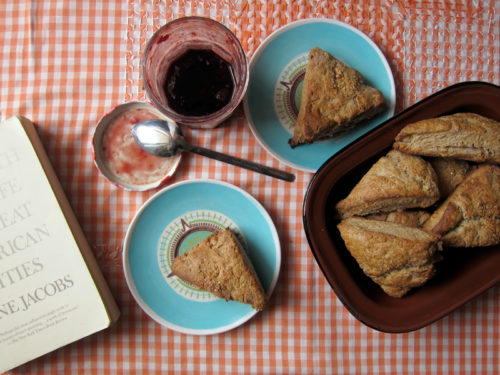 I’ve always felt a bit of a bias against buckwheat. Buckwheat was cute, but I was head over heals in love with Alfalfa. Then one day my dad brought home some fresh honey comb from the farmer’s market and I was completely absorbed with this new uber-sweet treat. The combination of the chewy wax and gooey honey along with all those cute little hexagons was so new and exciting. But along side the tray of honeycomb, my dad slipped in a tub of his favorite honey – buckwheat. Well, if he had a favorite honey I was sure it was going to be my favorite too. Oh to be six years old and eager to please! Let’s just be polite and say that buckwheat honey is an acquired taste. Very acquired. 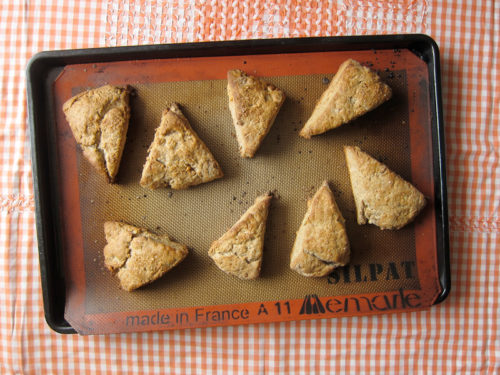 Ever since that buckwheat honey incident, I steered clear of anything buckwheat related (well, except for The Lil’ Rascals on Saturday morning television). I passed up diner buckwheat pancakes because just the idea brought back some awful taste memories. But then a bag of buckwheat flour – by way of a moving neighbour – found its way into my cupboard. And I was curious. I had spied some buckwheat cookies over at Orangette and then another recipe popped up at Food Loves Writing and I was more than intrigued. Hmm, maybe it was time to give buckwheat another shot.

So I did a bit of research and it turns out buckwheat isn’t related to wheat at all but is more of a cereal, which means it’s gluten-free. As for the honey, well, buckwheat honey is still gross. But the flour certainly isn’t. I tried it out using my standard pancake recipe and it passed with flying colours! And while cookies seemed like a good choice, it was a weekend morning and I wanted to bake up some scones for breakfast. That buckwheat bag was staring me in the face and so I went with it. Maple and walnut seemed like a good compliment to the heady buckwheat and it was. The scones were delicate and not too sweet and were so nice eaten warm and smeared with cold butter and a thick layer of sour cherry jam. Buckwheat, you’re not so bad after all! 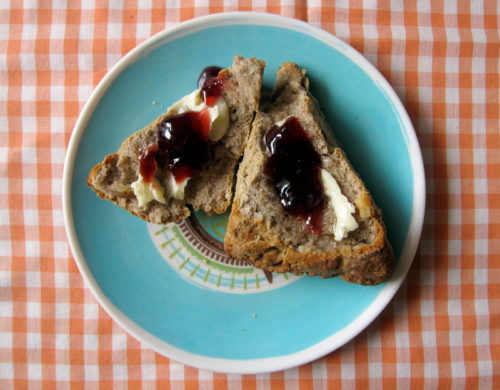 elsewhere: Looking for an easy brunch or dinner idea? How about a crustless quiche? Over at Poppytalk I make a broccoli and feta version without bothering with crust. Perfect!

Preheat oven to 425F. In a large bowl, whisk together the flour, baking powder, and salt. Add in the butter and use your hands to work it into the flour until you’ve got oat-shaped bits spread throughout the mixture.

In a separate bowl, combine the milk and vinegar, along with the egg. Stir well until mixed. Pour all but a tablespoon into the flour along with the maple syrup and extract, and walnuts. Stir with a wooden spoon until a dough forms.

Sprinkle a clean work surface with a bit of flour and turn out the dough, kneading for no more than 12 times. Pat dough into a round shape, flattening it with your palms to 1/2 inch thick and cut into 8 wedges. Place on a baking sheet covered with a Silpat or parchment and brush over the leftover milk/egg mixture. Sprinkle with raw sugar, if desired. Bake for 10-15 minutes or until golden. Cool on a wire rack and eat warm or cold.