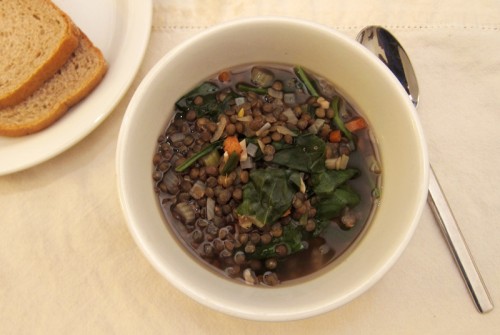 I love playing in the kitchen. Trying new ideas, techniques and recipes keep meals exciting and helps me write up new blog posts. Yet, there’s something comforting with the familiar and well-worn. This lentil soup is a very well-worn recipe. I transcribed it onto a blank page of my soup-splattered Moosewood cookbook years ago and I make it often. The recipe comes from an old boyfriend – but not a boyfriend of mine. 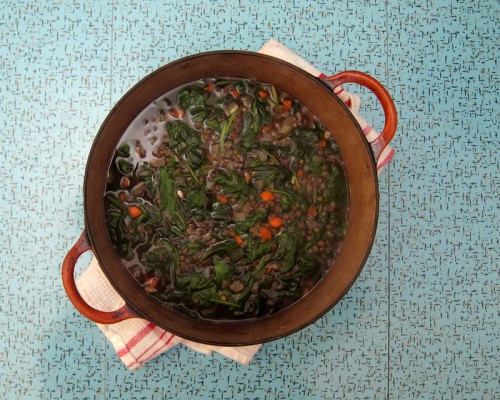 When I first moved to Vancouver almost 15 years ago, I made the move from London, Ontario with a good friend and we became roommates. Her first Vancouver boyfriend made this soup one Saturday afternoon and I was instantly smitten – with the soup, not her boyfriend. Prior to my first bowlful, I had never had lentil soup before and looking back, that tidbit kind of blows my mind. I was vegetarian at the time and cooked with tofu, beans and I practically lived on soup. One of my favorite dishes was a spicy kidney bean and lentil stew, so why I had never thought to turn lentils into soup is a stumper.

I was so thankful to have this soup in my repertoire and I made it constantly. It was an inexpensive meal to prepare – I used a couple cans of brown lentils, a couple of bullion cubes, and it would last for many a meal. I was drawn to its cheapness which was good since I was working for minimum wage in a record store while paying off my hefty student loan debt, amongst all my other expenses. But I loved how this soup tasted, especially when I was flush and could grate an unhealthy load of old cheddar cheese over the top of my bowl. 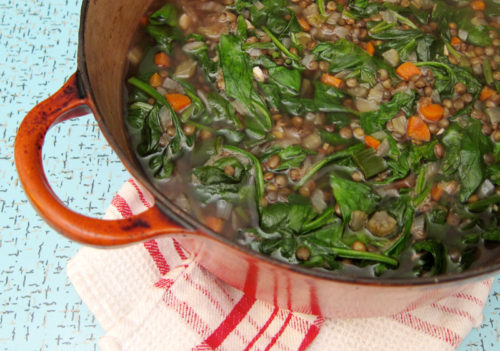 And despite all the years, this soup is as welcome and comforting as a pair of slippers. I now sub in French lentils du puy for the canned variety and have added in carrots for colour, but it still tastes as good as it did way back then. It’s certainly not fancy, but when you can have a huge pot of tasty homemade soup in about half an hour, how can you complain? Especially with grated cheese overtop.

In a large pot combine stock, lentils, onion, celery, carrots, garlic and chili flakes and bring to a boil. Simmer until lentils and vegetables are tender, about 20-30 minutes. Add in spinach and add in salt and pepper if necessary. Simmer for another 5 minutes. Serve and sprinkle with cheese, if desired.