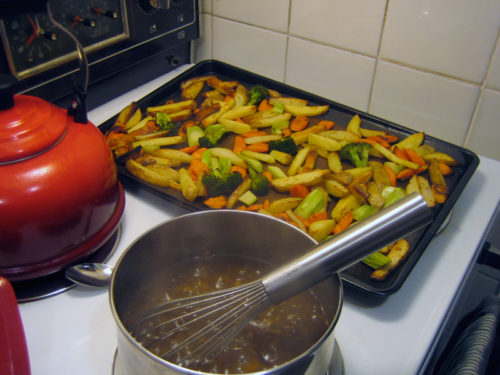 I grew up in a gravy-less household. When my mom made a turkey, she dumped the drippings into a gravy boat and that became the gravy in our family. Needless to say, gravy didn’t make much of an impression on me. However, when I became a teenager, I discovered a whole new world that didn’t conform to the rules our our kitchen. Fries and gravy at the mall was as common as scoping out cute new boys and a stop at the local food court was a required Saturday afternoon activity. The gravy poured over my fries at the local food court had little in common with my mom’s turkey drippings and I admit I was taken in by this dark, salty, thick sauce. 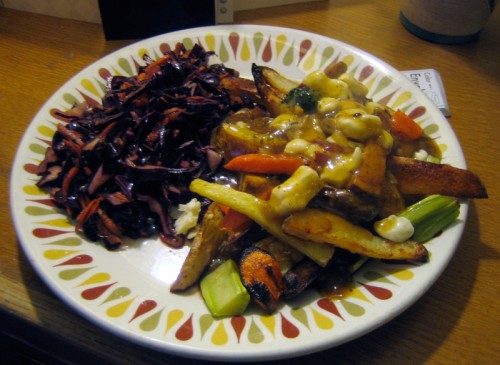 However, when I became a vegetarian, gravy quickly disappeared from my radar. While vegetarian gravy obviously exists, for me at the time, it was just something to eat with french fries. I didn’t think much about gravy for many years until I started eating meat again. I was a guest at a friend’s Thanksgiving dinner and she asked me to make the gravy with some leftover pan drippings and some wine. I managed to whip some up and I was pretty impressed with the results. Who knew it was simple to make? Up to that night, no one had told me.

Nowadays, gravy and I have become rather acquainted. I can make a mean sausage gravy to serve with Southern style biscuits for breakfast and I also make a mighty fine miso vegan gravy, but one thing I haven’t tried to recreate is poutine. But that changed when I bought myself a little bag of cheese curds from the farmer’s market. This poutine isn’t traditional. Instead of french fries, I use roasted vegetables. And instead of a gravy made with beef drippings, this one is 100% vegan (well, except for the cheese but I hear that this is a worthy substitute). I used a vegan veggie stock cube because that’s what I had on-hand, but any kind of vegetable broth you’ve got on hand would work well here. I also used cornstarch because it’s quick and fuss-free, but you could also create a roux with flour as your starting point. I flavoured the gravy with chipotle because I thought some smoky spice would work well with the roasted vegetables and I was right. This meal is definitely one you’ll want to make again.

Elsewhere: Oh boy! It’s been a busy week, writing-wise. Wondering what to do with that can of tomatoes? Check out my post on ReadyMade for some ideas and a recipe. Also on ReadyMade, I suss out some pretty fabulous icy sweet treats all made with sweetened condensed milk. Poppytalk has me gabbing about the weather & making a comforting baked pasta dish.

Preheat oven to 450F. Cut potatoes into wedges or fry shapes. Slice carrots on the diagonal. Toss with olive oil, place on a baking sheet and bake for 10 minutes. Break broccoli into florets and cut up stems and add to the rest of the vegetables, giving a quick toss. Bake for another 15 minutes or until vegetables are golden on the outside and done on the inside.

Meanwhile, bring the veggie stock to a boil. Add in chipotle and oregano. In a small bowl mix together the cornstarch with a couple teaspoons of cold water. Pour the slurry into the boiling stock and whisk until thickened. Turn down the heat and taste, adding more seasoning if necessary. If the stock is too thin, make more slurry out of cornstarch and cold water and add it to the gravy.

Plate up the roasted vegetables, sprinkle the cheese curds over top and pour over the gravy.