I’ve been swamped with work so it’s been nothing but crickets around here from my end. I haven’t had much to write about really, as all the cooking that I’ve been doing has involved just emptying out all the bits n’ bobbins from my pantry. It’s tasty, in a gotta-do-it kind of way, but not all that exciting. 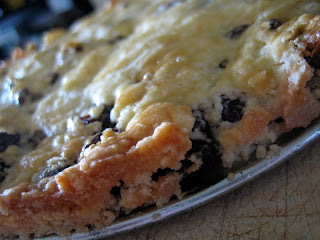 Yesterday I did celebrate one small work milestone with a bit of baking. After some website mockups that I had sent to a client were approved, I figured that a bit of celebratory baking was required. The thing was, I still had loads of other work to complete, so the prep and baking had to be quick so that I could get right back into the swing of things work-wise. Lucky me, I had just finished reading this post on Cook (almost) Anything at Least Once. The photo reminded me of my favorite bakery item: the eccles cake. I know that some people are all about chocolate or a macaron or a cupcake. But for me, if I spot an eccles cake, it’s mine. It’s not the prettiest or the sweetest thing on the shelf…in fact, it’s just a little bit dowdy and plain Jane. But I know that what it lacks in beauty, it makes up for in taste. Buttery, crispy and chewy all at once, and studded with lemony currants, it’s my idea of bakery perfection. Take that you starry-eyed cupcake! 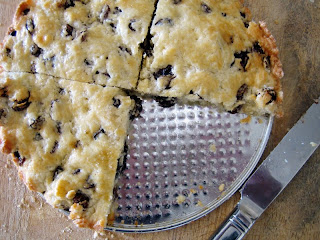 So getting back to the real star of this post, the buttery raisin biscuit. Now, I’m calling these a biscuit in the way the British refer to cookies. These are not to be confused with the Southern-style biscuits dripping with gravy or clotted cream. Nope, these are a bar cookie of sorts or something akin to shortbread. I made the recipe as directed, except I used plain ol’ raisins instead of fancy currants and added a bit of lemon zest just to remind me of those eccles cakes. I started preparing the recipe, weighing the ingredients at the top of the hour and by half past, the biscuit was on my kitchen table cooling. A 30 minute treat, indeed. I don’t have a fluted tart pan, so I made do with my small 7 inch springform cake pan that worked just fine. When I cut into the biscuit, it didn’t have the crunch I was after, but it did have a good texture that was somewhere between a dense brownie and a scone. Next time (and oh, there will be a next time), I will bake it a bit longer for a bit more bite. This recipe only makes a small batch of biscuits as I was able to cut 8 wedges and after they disappeared, I wanted more. So go ahead and make a double-batch! 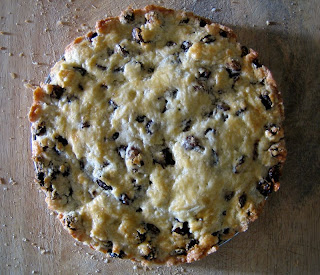 Preheat oven to 350 degrees. In a medium sized bowl, combine flour and butter. Get it all crumbly using your fingers until it resembles coarse meal. Add in sugar and stir with a wooden spoon until combined; add raisins and zest, stirring gently until evenly distributed. At this point, the mixture will still resemble coarse meal. Slowly add in a little bit of the egg and stir until a soft dough forms. You don’t want a dough that is too sticky. I used only half of an extra large egg, but I could have used a bit less.

Pat dough into a tart pan or a small springform cake pan. Make sure to get even coverage and then use the remaining egg to brush the top of the dough. Bake for 20 minutes or until the tops and edges are golden.

(recipe adapted from Cook (almost) Anything at Least Once)

« easy as pie: the best pizza ever
the secret of great tofu: green beans & tofu in a thai coconut sauce »