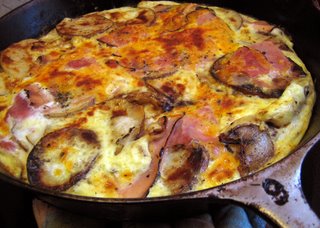 I awoke this morning to the sound of rain and i pulled up my comforter tight around my face while I reached around the floor for my book to help me stay cozy for a bit longer. When I finally did get out of bed, I already had our breakfast planned. A potato, black forest ham and egg frittata. Pure comfort and joy with just the right amount of heat from the oven to counteract with the slightly cool air coming in from the open kitchen window. Morning perfection with a cup of strong, milky coffee.

1. In a heavy cast iron pan, melt butter over medium-high heat and layer potatoes, garlic and onion and cover with a lid. After a bit, move about the potatoes, making sure nothing burns.

2. When the potatoes are nice and soft, tear the thin ham slices over the potatoes and cover the whole thing with the egg mixture. Sprinkle with the spices and then lift up the potatoes so that the egg gently falls under the potatoes. Grate over a bit of cheese on top and then place under the broiler for a few minutes until the egg is set and the cheese is bubbly. Serve with buttered toast.