garden fresh salsa (aka the best salsa ever!) 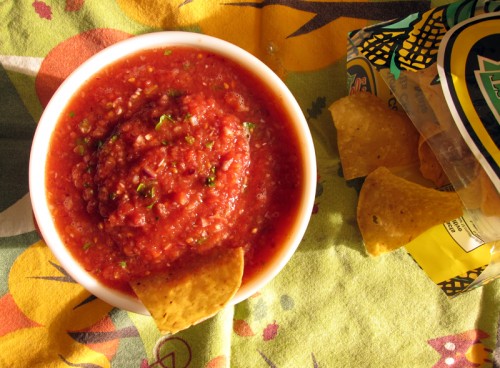 When I moved to Vancouver, I became pretty smitten with the salsa produced by a local company. It was The Vancouver salsa, or so it seemed. A tub of it would turn up at every pot luck, bridal shower, art opening – pretty much every event deemed worthy of snacking, along came the salsa. Add some tortilla chips and sometimes this salsa would qualify as a solo dinner. These weren’t my proudest moments. After years of the same salsa and the same chips, I became bored. Especially after a 5 week honeymoon camping road trip that took us all over the Southwest where I discovered such amazing salsa varieties! 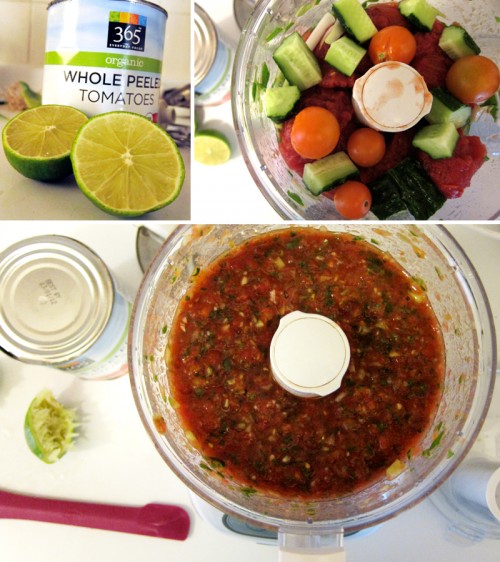 Luckily, a few new fresh salsas have hit the Vancouver marketplace to give the old salsa a run for its money. But I don’t really care, because now I have the secret to truly amazing salsa. Make it yourself! I got the basic gist of it from my friend and neighbour, Becka, whose husband whipped up a mean batch at a holiday party. The best thing was that he used canned tomatoes! Seriously, this is a game changer in my very small salsa world. He also used a food processor and that is key to the salsa’s success. I recently was gifted one from my dad and this salsa has rocked my world ever since. 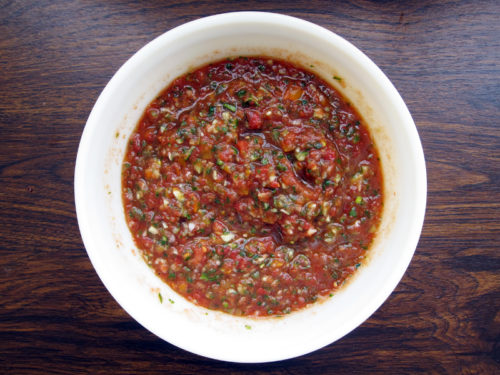 In the summer, I use fresh tomatoes and have strayed from the basic formula. Into my salsa goes all kinds of fresh vegetables. Cucumbers! Sweet peppers! Garlic! All local and organic. But sometimes when my fresh tomato stash isn’t as full as I’d like, I go ahead and use organic canned tomatoes. Just make sure to drain them and give the tomatoes a bit of a squeeze to remove all of that liquid. I freeze the liquid to use later in soups and stews, so don’t throw out all of that tomato-y goodness! 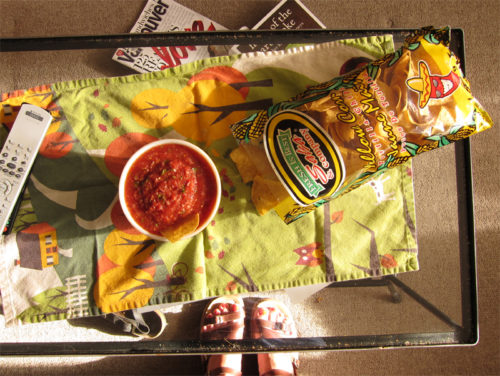 This salsa is a good basic formula, but feel free to go with your gut. I like a tangy salsa with a lot of lime, but maybe you’ll only use half as much. I like a good strong onion flavour in here, but you may want less. Hot peppers like jalapeño can be hot or not-so-hot, so taste before you throw it in. I always add in extra hot sauce – from sriracha, to a spicy habanero sauce to good ol’ Frank’s Red Hot – it’s all gonna be tasty.

Add the onion, jalapeño and garlic to your food processor and pulse 2-3 times until roughly chopped but not liquid. Dump in the remaining ingredients and pulse a couple of times. Taste and adjust seasoning if necessary. Serve with tortilla chips.

29 comments to “garden fresh salsa (aka the best salsa ever!)”