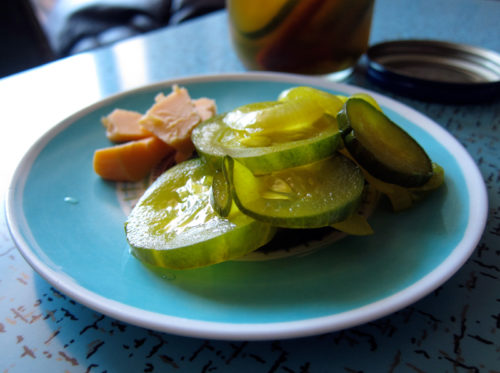 Canning is something that I’m afraid to try. It’s a stupid fear, but a fear none the less. I’ll get over it. Just like I did with yeast and bread making. I can do it. But in the meantime, I’m going to make freezer pickles. Haven’t heard of freezer pickles? Well, you are missing out. For one thing, they are easy to do. Maybe not as simple and as instantly gratifying as a quickle, but I’d say the satisfaction level on these pickled babies are sky high. 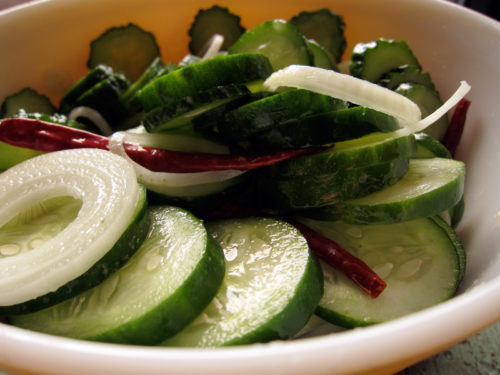 For one thing, you can use regular cucumbers–any kind of cucumber in fact. I had 2 different types of cucumbers from our CSA, a regular field cuke and another kinda fancy heirloom variety, and they both worked out just fine. The slices of cucumbers and onions get salted for a couple of hours to leech out the water which helps to make these pickles oh-so crisp and crunchy. Then they get spiced up with dried hot peppers (I went a little nuts here in a good way) and get kind of earthy and yellowy with a bit of turmeric. Sugar and vinegar are added and then they sit in the fridge for a couple of days. 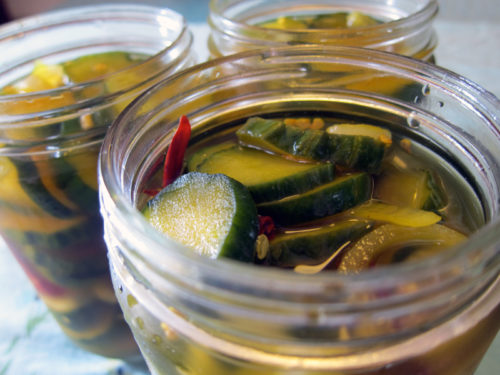 I tasted them while in the fridge stage and they were perfect: crisp and popped of flavour. But I froze them because that’s just what you do with freezer pickles. Why freeze ’em when they taste just fine in the fridge? Well, I searched long and hard for a good solid answer and I don’t have one. Some say that freezing breaks down the cell walls of the pickles allowing the brine to permeate the cuke quicker while others say that the opposite happens and the pickling essentially stops. In university, I took science for art students so I’m not the one to keep abreast of such matters. I can say  that for me it makes storage a lot easier and because they don’t last too long in the fridge, having frozen back-ups makes sense when I’m craving another pickle hit.

And you’ll want another pickle hit. And another, because these pickles are delicious and are truly the best I’ve ever made. Super crunchy (you can hear ’em from the next room) and never slimy. Cornelius says these are his favorite pickles. They’re like bread and butter ones but not too sweet. And they’ve got a good slow burn from the dried chilies, which seems to add more of a burn with each passing day. 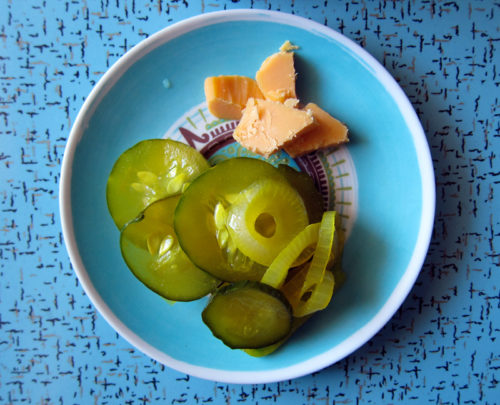 Regarding cucumber thickness, I cut these by hand, but you are more than welcome to use a mandoline. I like the assortment of irregularly cut pickles. Some are thinner than others and I prefer the slightly thicker ones – more bite and heft in each bite. Go with your personal preference & you can’t go wrong. 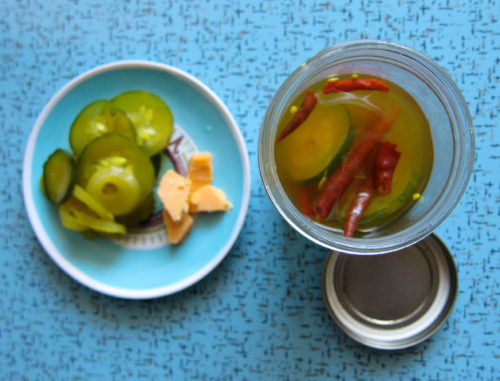 And just a tip when dealing with turmeric. Don’t use your prettiest, oldest Fire king white glass bowl when adding in the turmeric. Not only will it give your pickles a golden hue, but your bowl will stain pretty quickly. It’s not permanent–just have a good scrubbing arm and some baking soda on hand. Easy to solve, but thought a warning should be necessary.

In a large bowl, let the cucumbers, onion, salt and peppers mingle for 3 hours in the fridge. Drain the liquid but don’t rinse. In a small saucepan, heat up the vinegar, water, sugar until the sugar melts. Add in the turmeric. Pour over the pickles and keep covered in the fridge for 48 hours, stirring the mixture occasionally. Spoon into freezer containers (glass jars, freezer bags, leftover yogurt containers) leaving about 1 inch head room. I was able to fill up 3 glass jars of Adam’s peanut butter for reference. Freeze pickles for 8 hours or up to 6 months. Thaw in fridge before using & use up within 3 weeks.