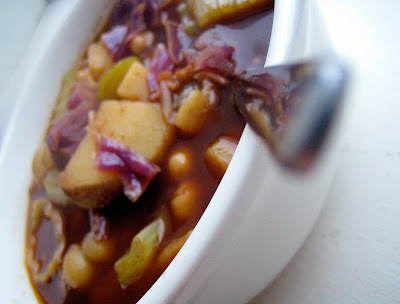 I’m not one for kitchy names, but I had this soup for dinner last night and it’s one and only purpose was to get rid of a cold. I woke up feeling under the weather and I didn’t want to get sick, so I culled all the vegetable remains in my crisper along with a little bit of bacon and got to work. While chopping the vegetables, I decided that instead of just a few cloves of garlic, I’d add in the whole head. Perfect for fighting off vampires and nasty bugs. And just to add in a bit of Eastern European flavour, I threw in 2 different kinds of Hungarian paprika. The soup was good and hearty and today I woke up feeling much, much better. 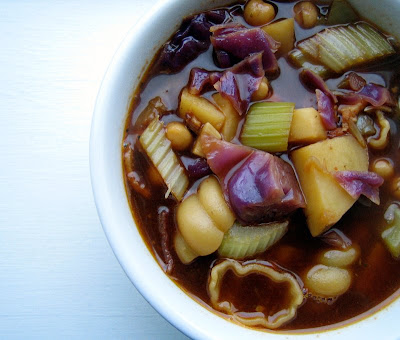 I’m not going to give you the recipe because while the soup was good, it’s a good example of taking random ingredients and making dinner without a recipe. So instead of a recipe, you’ll get just a minimal guide and hopefully a kick in the pants to get you started to make your own soup. Soup is easy and usually ends up turning out well if you just remember to taste as you go along. For this soup, I had half a parsnip, 2 strips of bacon, a quarter head of red cabbage, half an onion, a couple stalks of celery, a can of chickpeas, a near empty bag of pasta, along with some homemade turkey stock. These ingredients were chopped, sauteed and the liquids reduced before I had my first taste. It needed more, so in plopped a large squirt of ketchup for zing and after tasting it again, I added in a large spoonful of sweet paprika and another large spoonful of a smoked hot paprika. Now I was getting somewhere. I added in half the garlic at the beginning and half near the end. For me it was important to really taste the garlic and have it fresh so it could kick start it’s fighting powers. The ingredients themselves don’t inspire very much on their own, but put them together in a haphazard way, tasting as you go along and boom! You’ve got some mighty fine soup.

And yes, I’m giving this vampire soup all the credit. This soup warded off the evil and now I’m ready to make some caramel apples and watch horror movies all night with friends. Happy Halloween!!