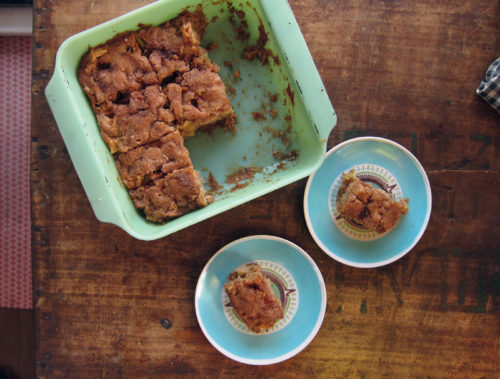 I should be feeling on the crabby side of the morning spectrum. I was woken up extra early this morning and I was out of my milk for my morning coffee. Yet, because it was the deep, repeated bellow of fog horns that kept me from sleep, I’m feeling okay about things. And coffee-wise, I made do with almond milk. It worked out okay. 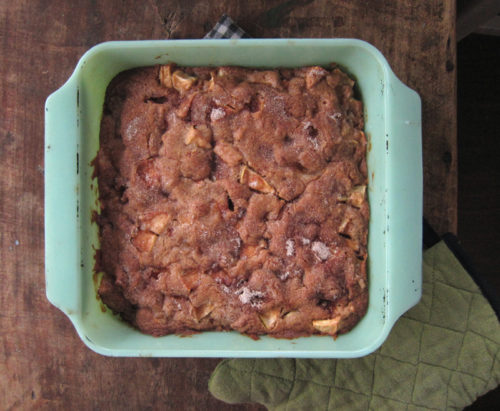 It’s kind of like this snack cake. It’s a Martha recipe and she calls them brownies. These are not apple brownies. I repeat, THESE ARE NOT BROWNIES. It’s some damn fine marketing though – who wouldn’t want to eat apple brownies? The name sold me, but the texture is more light cake than deep, dense brownie. Also, wouldn’t a yellow batter make a blondie? No matter. 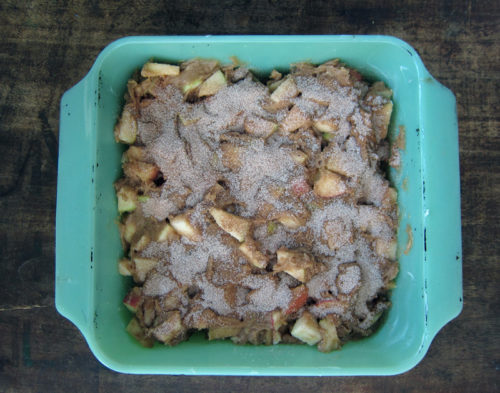 But the name alone isn’t the issue. This cinnamon-heavy, sweet, apple snack cake was crumbly. It was a little disappointing….until I ate my first bite. After that, I couldn’t care less. It was my kind of apple cake – chock full of apple goodness, but also buttery and sweet enough. Also, the next day, after a sit in the fridge, the cake was fine. No crumbs, ma. It held up and tasted better with age. 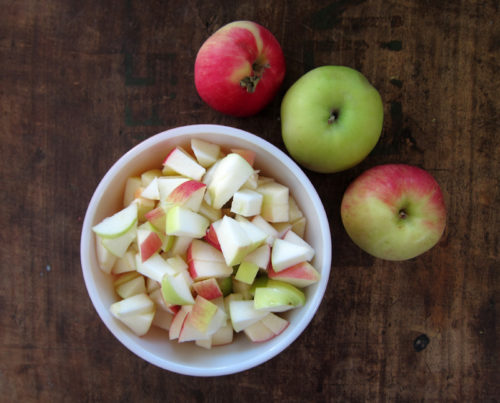 Also, as a total aside, I’ve been listening to the song Children’s Story by Slick Rick on the reg. The best part is when at the end of the track, he says “Crumbs!” which I totally dig (it’s at 3:46 if you wanna listen and you most definitely should). Also, the video on youtube skips the outro and the whole crumbs business, but it should be noted that his back up dancers are wearing turtlenecks. Ah, 1988, what different times you were! 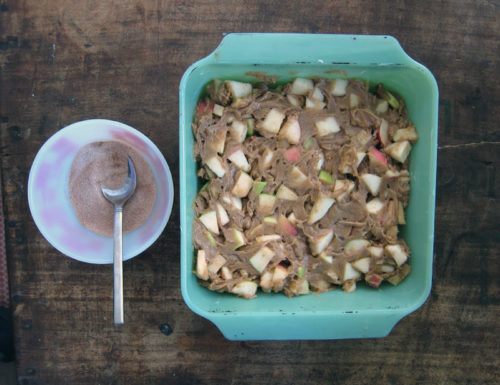 Since it’s January and you might be craving a little happiness, might I suggest you bake this apple snack cake. And just for fun, put on a little Slick Rick and slip on a turtleneck. It’ll all work itself out in the end. 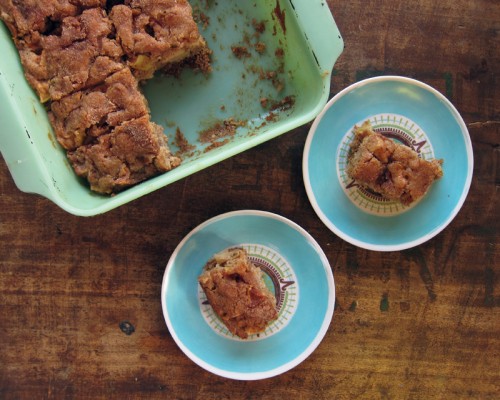 Martha calls these Apple Brownies, but don’t be confused. These aren’t dense or brownie-like in anyway, but each bite is super delicious. I found the cake a little bit crumbly on day 1 (they get less so as they age), but it’s an issue I can happily live with.

In a medium bowl, whisk together the flours, cinnamon, nutmeg, baking powder, salt, and baking soda. Using your mixer, beat together butter, sugar, and egg for 2 minutes. Add in the walnuts and apples, and stir by hand until combined. Add in the flour mixture and slowly mix until just combined. Spoon batter into the prepared pan, smoothing out the top and sprinkle with cinnamon sugar. Bake for about 40-45 minutes or until the centre is done. Cool on wire rack before slicing into squares. Keep in an air tight container for up to 5 days, if they last that long.

16 comments to “working it out: cinnamon apple snack cake”