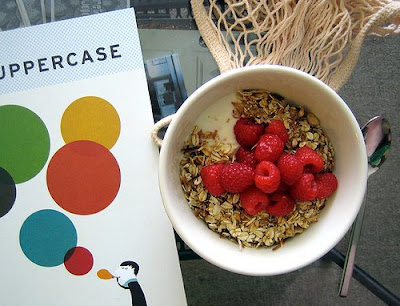 I know, I know, it’s hot outside and all I want to do is drink slushies. Now that it’s the weekend, maybe I should slug back a couple with a jigger of rum or two. But sometimes breakfast comes first. And an easy breakfast without a whole lot of fuss would be best.

This morning I was seriously craving some granola. The unfortunate thing was that my granola jar was empty and I only had one cup of old fashioned oats on-hand. So I tried my hand at the next best thing, toasted oats. I toast steel cut oats before I boil ’em so why can’t I toast regular old oats and just eat ’em as is? No reason at all! So that’s what I did…but I added a bit of this and a bit of that to, you know, jazz things up. The result? It was so good that I declared myself a genius on the spot!

The oven was barely on, so it didn’t heat up the house which is always a nice bonus for summer. We ate this topped with vanilla yogurt and fresh raspberries and it really hit the spot. The oats aren’t as crunchy as granola and because everything is slightly toasted, it has more flavour than muesli. I’m heading to the store shortly to stock up on oats, as I can see this getting regular play in my kitchen.

Turn on your oven’s broiler. Cover a baking sheet with parchment paper. In a bowl, combine the oats, cinnamon and brown sugar, then spread it evenly over the baking sheet. Bake for 2 minutes on the top rack, checking frequently so that nothing burns. Remove from oven and sprinkle with coconut and walnuts and bake again for another minute or so…again checking frequently. You want golden, not burnt. Remove from oven. Add yogurt to 2 bowls, divide oat mixture evenly between the two and top with raspberries.