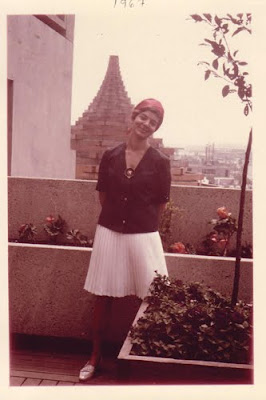 My mom died just over a week ago, on Thursday January 21st. I think it was around 7:40 pm in the evening. I was there sitting beside her hospital bed holding her left hand with mine and rubbing her head with my right hand. Her breathing was getting irregular and I wanted my brother and dad to hurry the hell up and get to the hospital, but mostly I was concentrating on my mom. Her breath. Her hands. How hot her head felt beneath the short bristles of her hair. Under her blankets, I tried to ignore how purple her skin had turned and how cold it was to touch. So I stroked her head and talked or just watched her mouth until she just stopped breathing. I held my breath thinking it would start up again like it had been going for the past few minutes. Stop and start. Stop and start. Stop. I remember locking eyes with my husband who was also in the room with me, rubbing my back. And then I started crying deep sobs. My mom, who had battled an intense two and a half year long journey with an aggressive brain tumor, was finally free. Her last breath was gentle and it was over. No more suffering. No more frustration because she had lost the ability to communicate with words. Peace, finally.

Two and a half years ago. That’s when it all began, this bolt out of the blue. A brain tumour. Cancer. Why my mom? My maman was strong, she was friendly, she was devout. She was also 12 years younger than my dad – she shouldn’t have to face death this early in life. She still had so much living to do. It just seemed all so wrong. One day she woke up and couldn’t move her arm. The doctors didn’t know what was wrong, but an MRI revealed a brain tumor. Cancer sixty years in the making caused by some ill-conceived radiation treatments my mom received to remove ringworm on her scalp when she was just six years old. The tumor was large and aggressive and the doctors had said that my mom had only months to live. It paralyzed the right half of her body and she lost most of her ability to talk. And my mom loved to talk and laugh and she could do so in both English and French. When I’d phone her hospital room, some days she was full of pep and wellness and the conversation flowed well. Often she’d lapse into French, her mother-tongue, and I’d try to follow along as best I could. Near the end, however, talking on the phone to her was difficult. Most times she couldn’t even murmur or sob, there was just silence on the other end of the line. It was a hard illness and my mom was brave. She was never afraid of dying.

There is such a strong connection between me and my mom. We have that same gap between our teeth and our eyes are big and we both laugh and smile a lot. During the funeral, people told me how much we looked alike. My mom taught me to cook and to love cooking. She taught me to be independent and do what I love. My mom was a worrier (aren’t most moms?) yet she loved my sense of adventure and encouraged my creativity. The happy, joyous memories I have of her when I was a kid, of us at the cottage, of her baking tourtiere at Christmas because it was my favorite, already have the curled corners of time passing.

Right now, the images I have of my mom are of her illness. My mom having trouble walking. My mom being so small and frail. My mom getting frustrated because the words wouldn’t come. But while she struggled – and she struggled hard, she still was at the same time, the very same person who loved to sing, who still worried about everyone else, the one who smiled brightly. 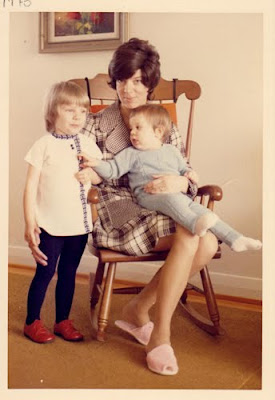 But there is joy in this story. Three days after I arrived in my hometown, my mother became a grandmother. My brother (the baby in my mom’s arms in the photo above) and his lovely wife gave birth to a beautiful baby girl. Initially, I was worried about the timing of things, but it turned out to be the best gift ever. My mom smiled when she met her granddaughter and I believe it was what she was waiting for. Now, she could die knowing that we’d all be alright. There’s a new part of the family now to love and to hold and to take care of. It’s funny how things work sometimes.

I’m back home in Vancouver again with my work and my husband and the familiar walls of our apartment, yet I feel off. Unbalanced. Something is amiss and it’s not something tangible that I can shake off just yet. My mom is gone. She’s not in pain, she isn’t struggling, she isn’t just a phone call away. She is gone and I feel empty. I don’t miss her yet. It just feels too raw. Instead I feel like I’m drifting and bobbing along in a fog.

This isn’t an easy post to write. Part of me wants to keep quiet and bundle up my stories and my family and keep things private. But mostly I want to talk, write and explain. People tend to shy away from death, from asking questions and I want to shake my friends and tell them that it’s good to talk. I need to get things off my chest and I need to feel that sense of community and togetherness. So there’s no recipe. No pictures of food. It will come. I just need a bit of time. Time to shake off the fog or maybe just to dwell in it for just a while longer.