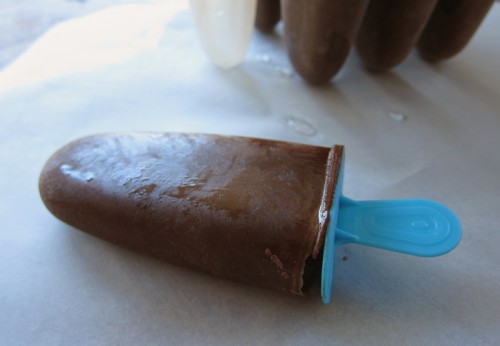 It’s hot out. Let’s not make a fuss. Eat a popsicle and call it dessert. Call it a snack. Call it dinner. You’ll eat a salad later or something with kale to make up for it. Or maybe you’ll just watch another episode of Orange is the New Black and linger a little too long with the freezer door open as it puffs its cold white air into your face. 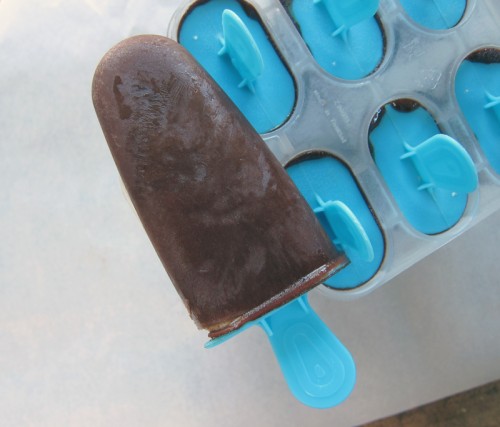 Popsicles seem to have hit their stride lately. In this town there are at least 2 small artisanal popsicle carts and food magazines and blogs are discovering all kinds of unique flavour combinations. But my homemade popsicle history goes back decades and is a little more pedestrian. My mom made orange juice popsicles from cans of frozen orange juice every summer. It was exciting at first, but by the third summer, orange juice popsicles lost their sheen. But then Bill Cosby hit the television, and the orange juice pops were replaced by chocolate pudding pops which we made by whipping up a batch of powdered pudding and freezing it. Those were some good times.

When I moved out, one of the first things I bought besides a hot air popcorn popper, was a dollar store popsicle set-up. At first, I made lemonade popsicles but then started throwing my leftover yogurt fruit smoothies into the molds. It was revelatory and became a standard summer time practice. I bought another dollar store popsicle maker set so that my freezer would always have popsicles. Not a bad way to cope with summer…right? 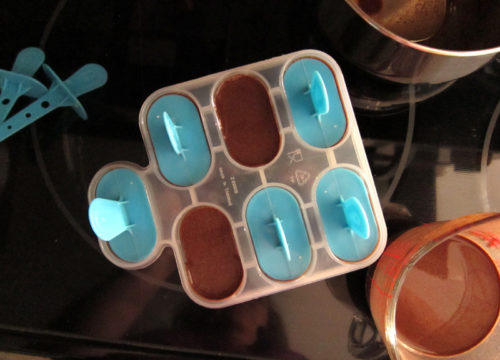 But this is my first attempt at a fudgesicle and I’m going to be straight up with you. I’m making more. I’ve already made a second batch with the addition of espresso. Mocha pops! Sure, making homemade fugesicles is a bit more labour intensive than pouring in juice or ice-tea, but it’s still easy. In fact, it’s like making hot chocolate, but instead of pouring the liquid into a mug, you’re pouring it into your popsicle molds and popping them into the freezer. Make them in the morning and you’ll have something dark and dreamy by the heat of the afternoon. That’s my popsicle prescription. And buy a second set of molds. Your freezer needs constant popsicle contact. 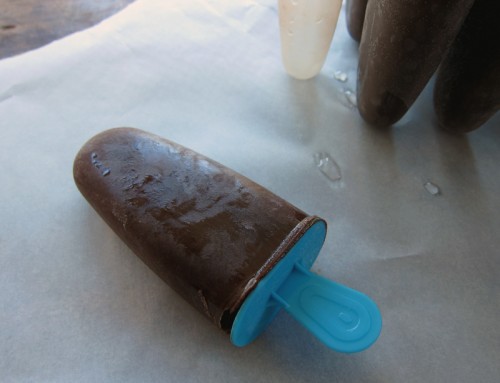 dark & creamy chocolate fudgesicles
This recipe if flexible. Use one of the variations below to mix it up a bit. Don’t like eating things on sticks? Just pour the cooled mixture into your ice cream maker and process as usual for a great creamy sorbet!

Combine the almond milk and sugar in a medium pot over medium heat. Stir until sugar dissolves. Add in cocoa, salt and chocolate chips, whisking until the cocoa is blended and the chips are melted. Strain if needed – I didn’t which leaves a very slight cocoa grit in the popsicles which I didn’t mind at all. Pour into popsicle molds or cool and pour into an ice cream machine to make sorbet. Makes about 9 popsicles.